This article has been written by Pranjal Joshi.

India is known for many traditional art forms which have been alive for several centuries, mainly because they were passed on from one generation to another either via guru-shishya parampara or family lineage.

One such great art form is ‘Sanjhi’. The word Sanjhi comes from the Hindi term ‘Sandhya’ that means dusk, the moment of time which is related with the creation of different types of arts. As per legends, ‘Radha’ who is the topmost servitor of Shri Krishna made ‘rangolis’ using natural colors, stones of different colors, flowers and leaves to make designs in order to serve and please Lord Krishna. The other Gopis also started to follow Shri Radha and pleased Lord Krishna in a similar manner.

In centers of Vaishnavism like Braj, Bengal, and Orissa, where Vaishnav communities enrich Vedic culture with Radha Krishna lore in visual and performing arts. This great art manifested itself in different schools depicting silhouette and stencil forms.

The great Vaishnav temples show glimpses of this art. This art is said to have begun in the fifteenth century. Later, it was advanced as a form of art by the Brahmin priests. In the Mughal period, this work of art showed its influence in the making of ‘lattice designs’. This great art form is chiefly practiced in the ancient temples of Brajbhoomi. However, Jal Sanjhi is created in Udaipur from the patripada Amavasya of Ashwin for fifteen days. 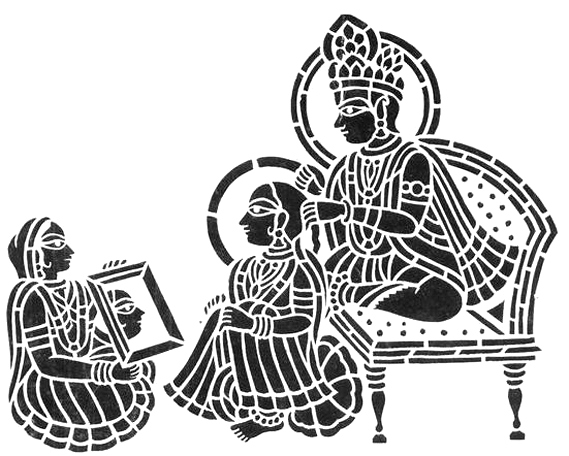 Radha-Krishna pastime being depicted in a Sanjhi

The designs of Sanjhi are used in the veneration of Shri Krishna. The artists of this art, start their work after worshipping their respective tools, the deities and the gurus who taught them this art. The cutting of complicated patterns is done depicting the pastimes of Lord Krishna.

The cutting process requires huge attention and talent from the artists. Sanjhi is used to decorate temples or places where the worship of Lord Krishna takes place, particularly during festivals related to him. At the time of festivals, Sanjhis are uncovered and various legends related to Lord Krishna are recited. 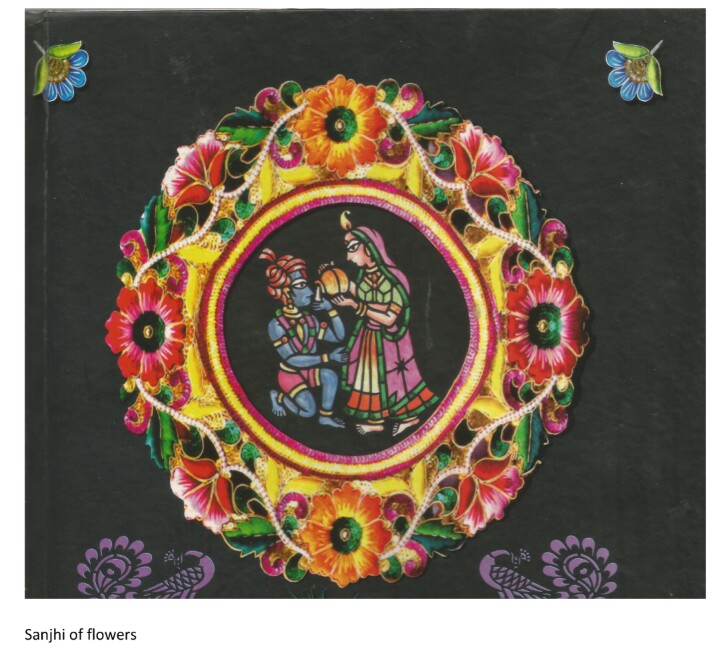 Plantain leaves Sanjhi. It depicts Vraja Yatra and it is in the Bhav of Chandravali ji.

‘Jal Sanjhi’ is another form of Sanjhi which started in the period of Krishna(Dwapar-yuga) and passed onto successive generations. These paintings are believed to have originated when Lord Krishna’s image was seen in water by ‘Radha’ in a pond, the image was outlined with flowers to create an image of Krishna. Since then, Sanjhis are made on the surface of the water as pictorial depictions to honor the pastimes of Lord Krishna.